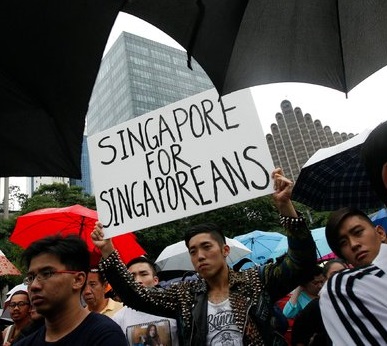 Singapore has tightened its rules on the hiring of foreign workers following protests over the large number of outsiders in the increasingly affluent city-state.

The Ministry of Manpower will crack down on what it sees as discrimination against locals, forcing companies to prove they first searched exhaustively in the Singaporean market before looking overseas.

Companies known to bring in a lot of foreigners “will be subject to additional scrutiny,” officials say.

Acting Manpower Minister Tan Chuan Jin said in a statement: “What we are doing is to put in place measures to nudge employers to give Singaporeans - especially our professionals, managers and executives - a fair chance at both job and development opportunities... even as we remain open to foreign manpower to complement our local workforce, all firms must make an effort to consider Singaporeans fairly.”

Currently, 37 per cent of Singapore’s workforce is non-resident, numbering over a million foreign workers in 2012.

Companies from next year will have to advertise for recruits first through a government-administered national jobs bank. Foreigners can only be hired if no citizens are qualified.

Any firm which is found to have a “disproportionately low concentration” of Singaporean employees in professional positions, and foreign managers found to favour their own compatriots, will also be closely watched by Manpower Ministry officials.

The law change is a response to widespread and ongoing complaints and protests, where locals say foreign workers are competing with them for jobs, housing, schools and space on public transport. There is also a more general complaint that multiculturalism may be eroding the national identity.

Two of the country’s biggest protests in decades have been over immigration policy.