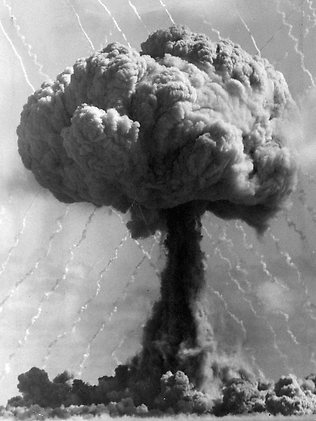 An anti-nuclear group founded in Australia has been awarded the Nobel Peace Prize, and used the attention to call for a complete ban on atomic weapons.

Members of ICAN celebrated at a gathering outside the Victorian Parliament, where the organisation started 10 years ago.

Its founding members include the families of Aboriginal elders who were blinded by British nuclear testing in South Australia in 1950s.

ICAN is a coalition of 468 grassroots non-governmental groups that campaigned for the UN’s Treaty on the Prohibition of Nuclear Weapons.

The prohibition has been adopted by 122 nations — but not Australia.

The treaty has not been signed by any of the states that actually have nuclear arms, and would not apply to them if they did.

“It provides a choice. A choice between the two endings: the end of nuclear weapons or the end of us,” she said in her speech at the Nobel Peace Prize ceremony in Oslo.

“The United States, choose freedom over fear. Russia, choose disarmament over destruction. Britain, choose the rule of law over oppression,” she added, also urging France, China, India, Pakistan, North Korea and Israel to do the same.

“A moment of panic or carelessness, a misconstrued comment or bruised ego, could easily lead us unavoidably to the destruction of entire cities,” she added.

“A calculated military escalation could lead to the indiscriminate mass murder of civilians.”

The US, UK, France and Russia did not send an ambassador to the prize-giving ceremony, something many have taken as a sign of their reservations about the award.

“The Government should be ashamed of themselves [for not congratulating the group],” she said.

Australia argues that banning the bomb outright would be emotionally appealing, but would not lead to any meaningful reduction in nuclear weapons.