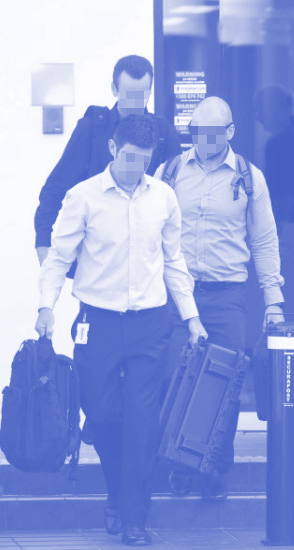 The president of the Law Council gave a speech this week about the erosion of press independence, at the same time as the AFP raided the home of an Australian intelligence officer.

Law Council of Australia President Arthur Moses addressed the National Press Club on Wednesday about the “creeping erosion of human rights and freedoms”, traded away for enhanced national security laws “which pose a threat to press freedom and personal liberties”.

While he was speaking, Australian Federal Police (AFP) officers raided a Canberra house believed to belong to an Australian intelligence officer.

Officers arrived at the house in the Canberra suburb of Griffith in the early hours, loud bangs were heard from inside before officers were seen carrying out black rubbish bags and cases, leaving the house around 3:00pm.

Mr Gill is the husband of Australia's ambassador to Iraq, Joanne Loundes, and has worked in a number of ministerial offices as a policy advisor.

It is unclear whether this week’s raid is connected to the previous raids conducted by the AFP, including on News Corp's Annika Smethurst and on the ABC.

Ms Smethurst's Canberra home was raided in relation to a story she published about Australian security agencies last year, which was based on leaked documents marked “secret, Australian eyes only”.

“We have always said the AFP raids on journalists were not intended to intimidate journalists but the people who have the courage to talk to journalists,” News Corp executive Campbell Reid said in a statement.

“Today we are seeing that process of intimidation continue.”

Back at the Press Club, Law Council of Australia President Arthur Moses said “Australia is in dire need of a national discussion about the importance of human rights and freedoms in our country”.

“I fear we are heading down a slippery slope,” he said.

“After 9/11, in efforts to preserve our rights and freedoms, governments here and around the world found themselves increasingly encroaching upon them. This was done in good faith, not with ill intent.

“Protecting our community and the safety of our people must be the government’s priority. But our Parliament is also the guardian of the rights and freedoms of Australian citizens. In this it is aided by the media, which plays a key role in defending the public interest and scrutinising the exercise of power.

“The media is not the enemy of our nation, nor should the actions of journalists in scrutinising government be criminalised. These responsibilities of the government, parliament and media should not be taken lightly...

“With a proliferation of statutes with a clear intention by parliament to abrogate rights and freedoms we can no longer rely on this principle to protect them.

“Since September 11, about 75 pieces of federal national security legislation have been passed. And there has been a slow erosion of our freedoms.

“The impact has been creeping. In isolation, barely noticeable.

“This year’s media raids shone a powerful light on the limits of freedoms – of people and of the press – in Australia...

“This is not a new challenge by any means. But it is a challenge we have stopped talking about as a nation. Many politicians on both sides of politics have informed me that they do not want to question laws purportedly made in the name of national security even though they have concerns about overreach. They don’t want to be accused as being un-Australian or endangering national security so they have waved legislation through the Parliament without testing it.

“The AFP’s June raids on Australian journalists were a stark example of how far the pendulum has swung. The raids were not the fault of the AFP, or the agents whose images were televised. They were investigating offences which had been created by the Federal Parliament. It is their job to do what they were doing – the problem is the law.

“The raids remind us why we must never stop talking about human rights in the context of national security. A free, independent press is a critical safeguard of human rights.”

The full speech is accessible here.