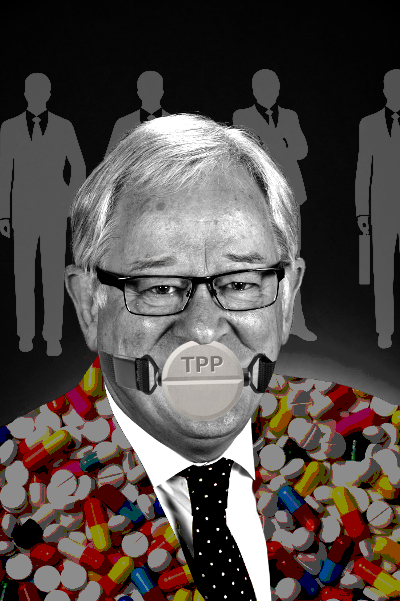 Governments representing about 40 per cent of the global economy are negotiating against the interests of freedom, universal health and human rights – and the private talks on peoples’ future will soon continue in Australia.

Trade Minister Andrew Robb is preparing to welcome counterparts from the 12 countries involved in closed-door hammering-out of the Trans-Pacific Partnership agreement (TPP) in Sydney this week, and if official indications are anything to go by – our final, signed, sealed deliverance will soon be in place.

The TPP agreement will change the balance between public and corporate interests in some disturbing ways.

So, as governments wilfully sign their sovereignty over to multinational corporate bodies, let us recap some of the greatest hits that the Trans-Pacific Partnership agreement will convey.

Remember though, WikiLeaks and its affiliates have only been able to reveal a couple of drafts from two chapters of the full TPP text, which is 30 chapters long in total and is the result of years of negotiations. It will be impossible to know what most of the agreement is about until the day it is signed.

Pharmaceutical companies need to patent new drugs to protect their formulas and make money to do more research. If they did not have intellectual property rights, many breakthroughs in biology and healthcare would not occur. However, the TPP agreement expands drug patents’ range and duration in a way that could do much more (physical) harm than (economic) good.

Draft TPP texts show governments responding to industry demands for extended patents, so that drug companies can keep their prices inflated for a longer period before generic alternatives are allowed.

Companies based in the US and Japan hold the largest share of such intellectual property, and have been working hard to ensure their patents and lines of profit last as long as possible. Unfortunately, this means that treatments and cures will be kept from the hands of those most in need, in the poorest parts of the world.

According to analysis of the latest leaks, Australia is backing US-and-Japan-led “evergreening” laws, which allow pharmaceutical companies to extend their patent monopoly on a drug by covering ‘new’ but not actually innovative formulas, some as simple as combining two existing drugs in the same pill.

Authorities at the Public Health Association of Australia (PHAA), the Australian Federation of AIDS Organisations (AFAO), Médecins Sans Frontières Australia, Palliative Care Australia and others argue (in PDF form) that such provisions are “extreme” and “would severely restrict access to affordable medicines in the TPPA countries”.

Enhanced intellectual property laws are the subject of the small sections of the TPP deal to have been leaked, causing concern in themselves and in the mystery of what else is in store.

According to some interpretations of the lengthy leaked documents, enhanced intellectual property and copyright rules will force TPP countries to conform their own domestic laws and regulations to new transnational standards.

This could limit how governments spend their tax dollars, and even threaten moves such as plain-packaging cigarette laws, which tobacco companies have slammed as an infringement on their right to put logos on poison.

These laws would give an investor company the right to initiate legal action against foreign governments for things they do inside their own borders.

For example, a multi-national company may feel that TPP-member Country X has enacted laws that limit its right to sell things at the volume and price it desires.

The investing company would be able to use the breach of the new trade treaty as a basis to sue the Government of Country X.

This could stop nations from bringing in environmental laws, human rights protections, public welfare regulations and other moves to protect people against rampant, unthinking and unblinking corporate drivers.

The Australian Government was arguing against the investor-state dispute rules, saying the local rule of law and needs like national energy security should have final say.

But with an LNP Government now at the helm, including a Foreign Minister who says “the Coalition would, as a matter of course, put ISDS clauses on the negotiating table”, it appears we may be more willing to relieve ourselves of the need for protection.

The hint of the iceberg

The secrecy of the negotiation itself may be one of the biggest risks in the looming TPP.

With each round of dealing we move closer to a signed document, but are still given only the vaguest official indication of what is in store.

“The TPP will be a positive force for further economic reform and trade liberalisation in our region,” Trade and Investment Minister Andrew Robb said, elucidating absolutely nothing in a recent press release.

We know that the original deal was drawn up somewhere around 2005 by the Office of the United States Trade Representative (USTR) - a US government body that exists to define and promote business and economic interests through trade policy and international law.

Changes could be made to all of these areas and agencies, and at risk of becoming repetitive; the people the changes may most drastically affect will be the last to hear about them.

The Pirate Party, Electronic Frontiers and campaign group Fight for the Future are some of the leading factions fighting against the TPP’s strange new world, and with a matter of months left before the dotted line is signed, they are all appealing loudly for support, assistance, and simple recognition that this will be bad news.