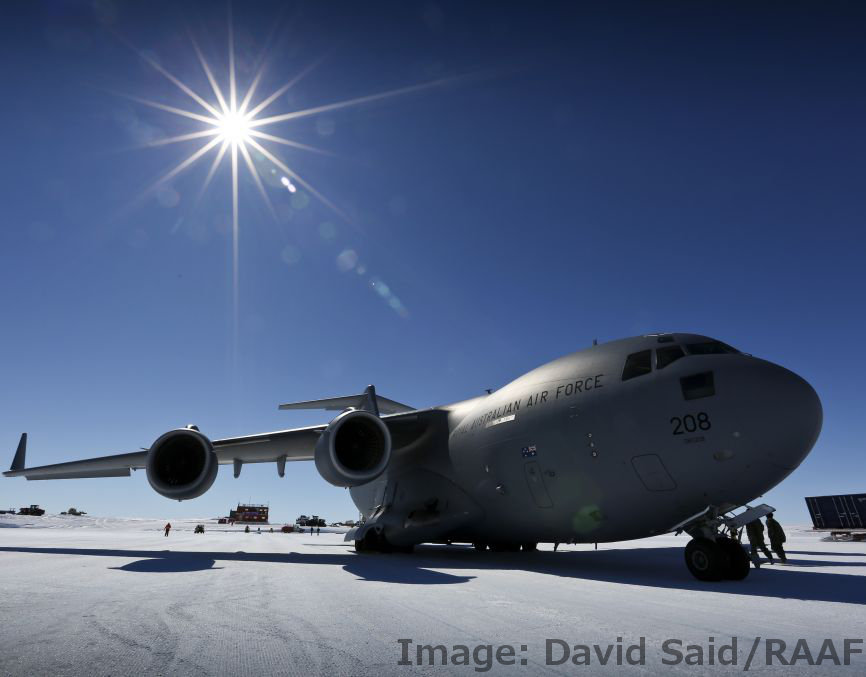 Australia has successfully landed a C-17A Globemaster on Antarctica – making it the largest cargo vessel ever to touch down on the frozen continent.

The C-17A has delivered heavy cargo to Wilkins Aerodrome in support of the Australian Antarctic programme.

The Casey Station near the Wilkins Aerodrome is usually supplied just once a year via the Aurora Australis Icebreaker ship, with both sea and air transport to Antarctica limited to short windows in weather.

The C-17A cargo plane can carry 70 tonnes, but was limited to 20 tonnes on this trip to ensure it could get to and from Antarctica without refuelling, and to land and take off from the ice.

The Globemaster flew the 3450km from Tasmania in just over five hours, landing at Wilkins and unloading 12,340kg of cargo.

The shipment included a brand new Hägglunds - a dual cab vehicle that operates over snow and ice terrain and is used to transport personnel and equipment in and around Antarctic stations.

The flight is one in a series of proof of concept flights being trialled by the Royal Australian Air Force and Australian Antarctic Division, with the remaining flights scheduled to take place between November 2015 and February 2016.

The potential to use the C-17A in this way offers a massive boost to the Division’s logistical and scientific capabilities.

As the largest aircraft to have flown to Wilkins Aerodrome, the C-17A offers an unprecedented cargo capability to complements the Division’s existing transport options.

Following the proof of concept flights, a full review will be undertaken by the Australian Antarctic Division and the Air Force.

But it does not mean that the planes will become regular visitors to the icy southern continent, with no future commitments past these initial flights.