Gallipoli effects from the other side 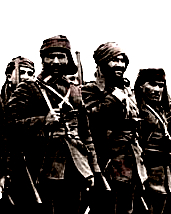 Australian researchers have exposed the cost the battle of Gallipoli on the Turkish side, long after the dead were cleared from the historic beach.

In a detailed analysis, The Effects of the Gallipoli Campaign on Turkish Child Survivors in Anatolia, Deakin University researchers reveal World War I had drastic consequences not only for those who fought on the frontline, but the children born just before and during the battle.

Economics Department researchers, Dr Mehmet Ulubasoglu and Dr Cahit Guven, found instead of going to school, many of the children were sent off to work in Turkey's dominant agriculture sector, sometimes aged as young as five.

They say Turkish defence data and the nation's census figures show the effects on children were worst in regions that were home to the highest rates of soldiers killed.

“Overall, children from towns which had large numbers of soldiers who died at Gallipoli were less likely to go to school and more likely to be illiterate than their counterparts,” Dr Ulubasoglu said.

“We found the literacy rate dropped according to the number of soldiers killed from the region.

“The deaths of thousands of individuals aged 20 to 40 in a short space of time generated a large vacuum in the labour market in Anatolia, the ancient geographic name for the motherland of contemporary Turkey.”

The researchers found the majority of the death toll was borne by western provinces in Anatolia, including the north-western province of Bursa which suffered the highest number of deaths, with 3,737 soldiers killed. This was compared to a median rate of 506 across the country.

Dr Guven said the study also showed that for every additional 1,000 soldiers killed from a province, children born in that province in 1911, 1912, 1913 and 1914 were up to 2.5 per cent more likely to be illiterate depending on the birth year, compared to the children born in the same province between 1916 to 1920.

“This is a significant number considering the literacy rate was 34 per cent across the 10 year period we investigated,” Dr Guven said.

“Our figures suggest that the war was responsible for an important proportion of illiteracy for the cohort in question.

“Similarly, for every additional 1,000 soldiers killed from a province, children from that province lost 0.12 to 0.17 years of schooling, which is again a substantial amount given that the average years of schooling in the entire sample is 1.47.”

“A large number of children were either left as orphans or malnourished due to absence of their household's income-earning person. Also, the heavy consequences of the war resulted in mass psychological trauma in Anatolia for adults and children,” Dr Guven said.

“The Gallipoli War is well known for its severe repercussions on Turkey's economy and manpower, with much of those experienced by civilians within the region.

“However, despite the major significance of the Gallipoli War in modern human history, there has been little systematic inquiry into its consequences, and more so, its impact on civilian victims.

“We felt that the story of Gallipoli was incomplete and one that needed to be told.”