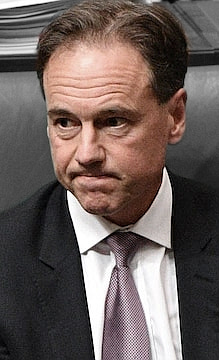 Health Minister Greg Hunt has been accused of interfering in the review of a medical product.

In May last year, John Skerritt, TGA deputy secretary, said in an email that he; “Had another call from the MO [minister's office] - they are very keen for this issue to be reviewed.”

Ellume, the company behind the product, is owned by a Liberal party donor, but Mr Hunt has denied helping push for the regulator's review.

Existing regulations against the use of self-diagnosing devices, including for the flu, have prevented it from being approved.

In an email dated May 30, 2019, Professor Skerritt said: “The basis for this prohibition, which has been in place since 2010, was that it is considered that such testing is best conducted in conjunction with a healthcare professional”.

“This blatant misuse and cover up of a respected independent process is the latest in a line of scandals from the Liberals and their mates,” Mr Bowen said.

“The Therapeutic Goods Administration advised Australia was 'some years behind some other medium-large [medical] regulators' on this matter,” his spokesperson said.

“The TGA indicated that a review would require ministerial support as standard practice. A formal request for a review then followed with the minister's consent in line with the TGA advice.”

“I think we're being led in today's society by Twitter feeds from anonymous people - I think we need to strip that emotion away,” Mr Dutton told reporters.

“As I keep saying, let's stick to the facts.”